Andrea and Jordan are a South Ontario couple who were not seriously considering living tiny when the start of the pandemic brought financial stress and life changes that led them to be creative.

As if they weren’t living through enough change with moving, job loss, and switching careers, another surprise happened at that same time.

Andrea says, “Literally when we decided to put the house up for sale, we found out that we were pregnant.”

Heading in the direction of minimalism was a natural choice for the young family.

Jordan says, “I always liked the idea of having less. I would classify myself as kind of minimalist. Even when Andrea and I met and while we were dating, we kind of talked about having a tiny house as something we may do one day. Maybe when we retire.

“And then it wasn’t until the pandemic hit that we’re sitting in this big house, which was a back split. And I’m thinking, what do I need two living rooms for? Why do we have two dining rooms? I would be perfectly happy in something that just had a washroom, bedroom, kitchen, and some space to put the TV.”

“We were just sitting there thinking, there’s so much wasted space, unused space. And to be honest, even if you don’t use it, you still have to clean it.”

The couple was also looking at the move to a tiny home as an opportunity to have more of a connection with nature, perhaps in a spot with no rear neighbours.

Andrea says, “People sometimes say, Oh my God, how could you live in a such small space? Well, the small space they are probably picturing is a basement or it’s an apartment building where you’re just surrounded by concrete. But would the space feel as small if they were surrounded by at least half an acre?”

Jordan adds, “I’m not really an outdoorsy person. I do some things outside but I would definitely prefer to stay inside and watch a movie. But with this new property that we are going to have, I’d like to find more activities to do outside.”

Looking for land for a tiny home

“Even before we officially moved out of our house, we started looking for land down in the Niagara region. And the issue with trying to look around here is people, especially during the pandemic, were trying to kind of capitalize on the market, selling off these little tiny pieces of land for ridiculous prices.”

“The whole point of small living, tiny living, for us was having more financial freedom and the land was really expensive.”

“We were kind of starting to get a little disheartened because we didn’t want to spend that much money. So we decided to expand our search. We didn’t want to go too far away from family but we did end up finding a piece of property in the South Bruce area for about half the price. It had all the municipal services, fiber. We wouldn’t have to get septic or a well.”

Because Andrea and Jordan were looking to build a tiny house on a foundation, and it would be the only dwelling on their property, that meant a very different land searching experience than that of tiny home on wheels owners.

“We started honestly just calling municipalities. When we were looking at different properties and we found one that we liked, we’d call that municipality and say, this is the property we’re looking at, does it have a minimum footprint. There was one where the minimum was something like 1,600 sq. ft., way out there. But other than that, we did not encounter many that did have minimum square footage.”

“That was the first hurdle question to ask. And the other advice we got from an early-in-the-process meeting with our tiny living consultant, Bianca Metz, was, don’t, don’t, don’t don’t make any offers without a condition of building permit approval. And of course, once again, in this market, it was so difficult to make any sort of offer with a condition. But, thankfully, it worked out and we got the land.”

“We had already had conversations with the municipal planner of South Bruce, who is a really nice guy and he’s heard of tiny homes before. We shared our concern in terms of being worried that there might be something in the plans that would cause him to not approve. And he just kept reassuring us that as long as it’s built to code, then you should be fine.”

“We had already had conversations with the municipal planner and he just kept reassuring us that as long as it’s built to code, then you should be fine.”

The final approval still took a bit of back and forth, but the Andrea and Jordan had peace of mind that their home would not be rejected based on size.

“We kind of approached purchasing the land as, what’s the worst case scenario? They’re not going to dock us on the house being too small – they don’t have a minimum. That was our main requirement for it. Other than that, if there’s anything else they want us to change, we can talk and see what we can do.”

Andrea says, “I don’t think there are any real hurdles for tiny homes per se because the issue is them being on wheels. Ours is on foundation and it’s going to be a permanent home.”

What does the tiny home mean…

Andrea, “For me, it’s about having peace of mind, having our own space, not feeling so stressed, not having so much clutter.”

Jordan says, “This is going to allow us to start life. That is the absolute biggest thing for me. We are in a rental right now with our little guy, we’re not settled in here. I’ll be finished school by then. This is where life is going to start.”

“This is where life is going to start.”

You don’t have to own everything: an ode to shared spaces. 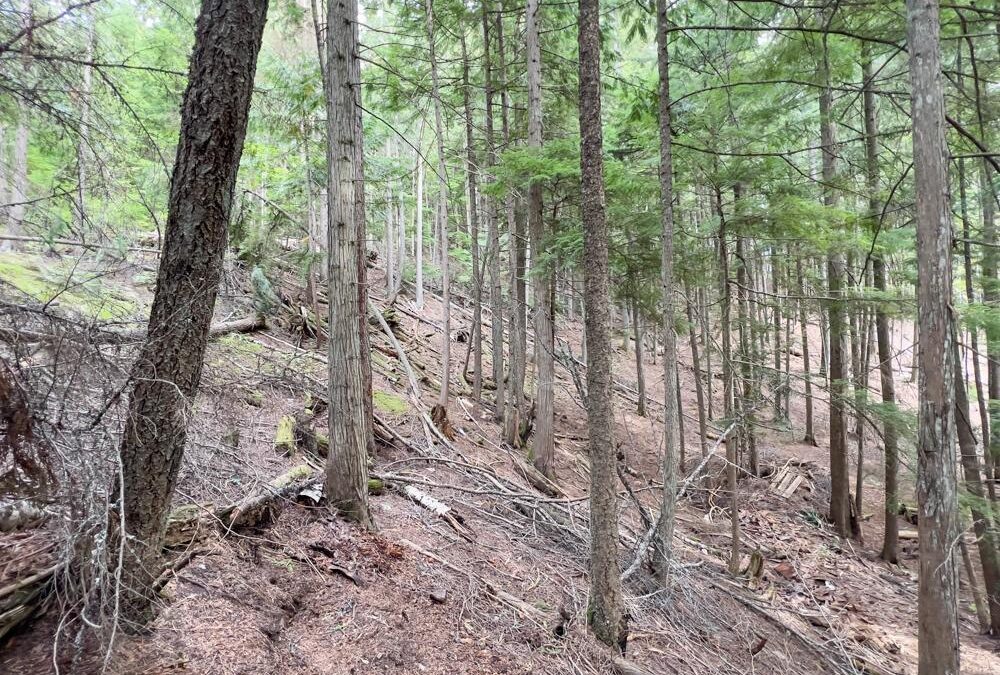 Need land for a tiny home? There is no zoning in this BC area

Tiny home comments that gave us pause in 2022